My mother having been studying psychology for a while now, I got some basics to put words on phenomenons. Not only is it helpful to understand abstract concepts, but it’s also great to keep evolving ourselves. Especially when words are your work and you’re seeking after Truth each and every day of your life.

One day, she told me about drivers. In Transactional Analysis, they are implicit (or explicit) injunctions that we integrate as programs to shape and influence our actions. They have advantages and disadvantages. In particular, when you become adult and keep an old driver from your childhood without updating it. It can become tyrannical and engender depreciation, frustration or helplessness. Five main drivers have been recognized as the roots of all others.

Be strong is the first one, from which followed Manage it on your own.

When I was 7, I installed that driver very strongly myself. Nobody told me anything, I just had a powerful insight that it was exactly the one I had to move after, right now. It was reinforced all around me by the situation: teachers, school environment, social life. It was not building a shell, but rather establishing a kind of network of knowledge and skills that would guarantee a complete autonomy. And that for many reasons: because I thought other people would think I’m less able than them and I didn’t want to feel ridiculous, because nobody could help, so I had to do it myself, and finally, because I didn’t want to disturb anyone. In fact, I knew I could do anything, and that I wasn’t less able, but I wanted to bring proofs, for validation from others, as we all do to be part of a group. And as a proof for myself, that I wasn’t being cocky and fooling myself about my worth.

The program had been installed, and put in sleep until I left to Paris. No update then. It was suddenly reactivated with that new chapter of my life, and for years I’ve been ran by that driver. Falling often, but always finding the right circumstances to rise again, and better. Gradually, I took all the advantages of if. Wringing its positive aspects. Hardening myself in work, in family, in love, with friends. But progressively, I didn’t see its intoxicating effects coming. As everybody, I had experienced suffering, and I knew what it meant to want to die, so I pushed in order to be certain to be able to recover if necessary. I speeded the process up, using the field of fresh possibilities that my recent meditation practice revealed.

Time flew. And you start to know the story. I broke up, I left my job, I became independent, I left my apartment, and I went on travelling. Perfect scenario to become even stronger, and to collect even more profs of my capacity of managing everything on my own. Of course I had disillusions, I failed, I set my limits to late, I cried, I deceived myself, I saw the infinite delusion I was living in, I had doubts, I got lost. Like everyone else. I just kept trying, again and again. Following that loud order inside of my head, saying « that is not enough, you can be stronger, you could do so much more, would you manage to go to India on your own? Do it! Would you manage to trek around the Annapurnas on your own? Do it! Would you manage to live your entire Life on your own? Do it! ».

At one point, I was ready to have a child alone. I even told my mother « Look, if it comes that the father leaves me or he doesn’t want that baby, or I’m too old and with no partner and decide to adopt, it will be all right. I could be a single mum, I know I can do it and raise and love that child alone. It’s OK. I am not afraid. » She stayed silent at first, starring at me with her secret blue eyes. Then she said : « And we could help you, as well. » I heard, but didn’t listened that part. Yeah, anyway.

And then my spiritual path kept going. I was more and more amazed by Life Itself, by the magic of the cycle Life-Death-Life, like I’ve always been. Collecting experiences and memories as I used to do with pencils and notepaper. But this time, as I landed for the fourth time in Thailand, something hit me. I was a bit tired of wanting to be my best self.

What Christopher Wallis thinks about that…

Transitions have always been quite a thing for me. Jumping from a place to another is not simple, despite my passion for travelling. My best friends can tell how traumatized I could get to sleep at their places when I was younger. Nights of total panic, shaky excuses to cancel and tears of despair (really!). Today, a week at least is very necessary to be more centered and less confused when I leave for long periods of time. Usually, I would tuned perfectly into the vibrations of the people around, the customs, to dive fully into the experience. Usually, I would be like a blank piece of paper, to absorb and paint a brand new story. Absorbing, that is the right word. Like a blotting paper, to understand on a deep level what those surroundings are about. To play with it. To adapt the best I can to be accepted. To be loved.

As 2017 turned 2018, I thought that the first semester would be the extension of 2017. Packing, unpacking. Flip-flops, sweat, introducing myself in 2 min, meditation, hugging benevolent strangers, playing with my comfort zone, WhatsApp, sore muscles, yoga, endless discussions about existence, analyzing human behaviour, falling in Love, leaving and starting again. I left France remembering all my previous take-offs. The feeling of being active, master of my life, free to do whatever I wanted, whenever I wanted (within the limits of my bank account…). And yet, after all this journey into the world and through myself, I still had the sensation of not being free from my conditioning and programs. The hardest prison to escape from. Maybe the only one we’ll never completely break free of. 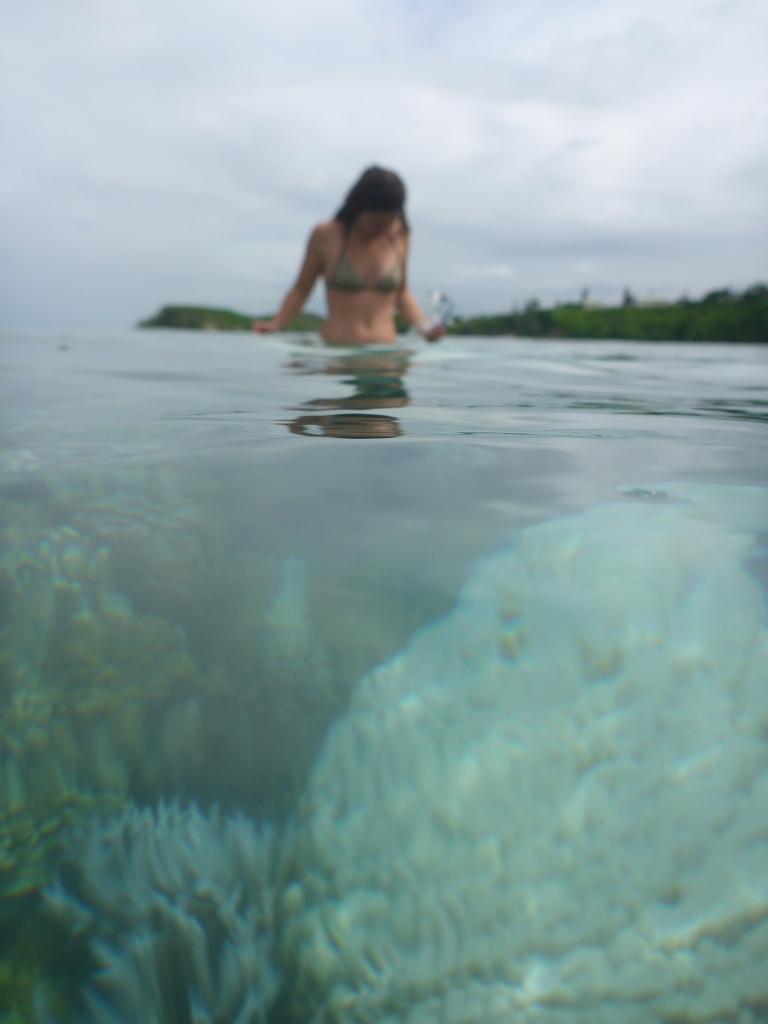 I knew my wish was to build a bridge between what I had learnt during those previous years and my life in Europe. The way I would do that was still a bit blurred though. Even if slowly everything seemed to fall into place, and the choices I made 3 years ago find their explanation today, a lasting harmony was difficult to conceive. I was talking about been a bridge but unable myself to be strong enough (again!) to build it with my own integrity. Here the limits of my driver started to appear.

Flowing with people hasn’t been a bad choice, neither listening my instinct and doing all kind of crazy stuff. I needed that, and still believe that it is by putting ourselves in difficulty that we can learn and grow quickly from a purer place within, by resetting. Going full on and explore as many aspects of ourselves as we can will help to bring light on our shadows, to be truer and eventually find Oneself. In a way, I succeeded. Not to find anything, but to realize that I won’t find any answer by only working in terms of myself, as the entity to be fixed. Living in real the fact that the limits of my freedom were the beginning of others’, and that we were all intimately connected. Thanks to beautiful souls on my way, I learnt humbleness, true love and compassion.

My driver Manage it on your own couldn’t have bring me the smallest part of what beings did. That is why I had a strange feeling when I arrived this year. For the first time I could feel the connection between my people back home and the people all around the world. People who lifted me, inspired me, made me laugh and were as many disturbing reflections as I needed. Many times this year, I have been filled with contentment. The sensation that I could die the next day, I wouldn’t care. Because I did everything I wanted so far, it wouldn’t be a big deal. I proved that I was, in fact, strong, and that I could manage it on my own. I did most of the things that would frighten me before, that would make me feel very insecure, uncomfortable, hopeless, especially those involving people because social skills were not my best ability. And the icing on the cake: I stood up in front of students to share what I learnt about yoga. And people were happy. And I loved it.

Today, it becomes real that the next steps of my personal evolution will result from the evolution of all sentient beings. From my commitment to work towards it.

Wanting to be strong, to be the best version of myself at all costs was pointless, it was like sharpening a knife not to cut anything with it. Having a beautiful set of tools and not building any amazing house with it. Playing bass guitar and never try with a drummer! I was focusing too much on the way (because that is supposed to be where happiness lies, right?), but lost a direction, somehow. And that’s fine, that was even very useful. But when I left home 10 days ago, I reached that point where the purpose of my next travel was not so obvious. Yes, I wanted to keep evolving, studying the very depths of the human mind, its pitfalls and potential. That is definitely one of the best reason to be alive. But how can we conceive a world in which things are separated? People disconnected? I was claiming the importance of connection through touch, whereas I was looking for a way to be so autonomous that I wouldn’t need neither want anyone. Thinking that it would be a terrible weakness. Then I remember that a friend told me « It requires a lot of courage to be weak. » and funnily, I quoted the Dalai-Lama during my last yoga class:

Courage is to resist to fear, to manage the fear. Not the absence of fear.

Being a part of the living network of this Planet is not a weakness. Wanting to have people around, to connect, is not a weakness. Because I lost myself too often interacting with people, I trained to take the place which is mine, and still have a hell of a work to do. And OK, 2018 is not the extension of 2017. Let’s be brave and face it. It is time to recognize all the links between us, to honor all the connections nourishing our souls, to pay them back after having made some space for them to exist. For me, it is time to update my driver.

Yes, good work, no more proof needed: I can manage everything on my own. I can, but I don’t have to.